The Canadian duo’s The Murder of Crows (2008) will debut in the United States at New York’s Park Avenue Armory on August 3 and will remain on view through September 9. Cardiff and Bures Miller are also showing two new pieces at Documenta, in Kassel, Germany through September 16.

Cardiff and Miller have been collaborating since 1995, though they also make solo works. (For an explanation of their assignation process, see Peter Traub’s interview with the artists on turbulence.org.) They represented Canada in the 2001 Venice Biennale where they showed The Paradise Institute, a sculptural faux movie theater. In 2001 a major survey of their work traveled from PS1 to the Musée d’Art Contemporain in Montreal, to the Castello Rivoli in Turin and to the Astrup Fearnley Museum of Modern Art in Oslo. The Museum of Contemporary Art Barcelona surveyed their work in 2007. “Janet Cardiff: The Walk Book,” published in 2005 by Walther Konig, includes a CD of Cardiff’s audio-walks and is one of the coolest books ever.

On the second segment, artist Robyn O’Neil discusses her These Final Hours Embrace At Last; This Is Our Ending, This Is Our Past (2007), a 14-foot-wide graphite drawing. (A larger JPEG is in the jump, a much larger JPEG is here.) The Modern Art Museum of Fort Worth announced its acquisition of the piece this week. O’Neil’s work is in the permanent collection of many museums, including the MFA Houston, the Dallas Museum of Art and the Whitney Museum of American Art. Last year Irish director Eoghan Kidney made an animated short film based on O’Neil’s work. Don’t miss the trailer.

Links to videos of Cardiff and Miller works discussed on this week’s program:

Robyn O’Neil, These Final Hours Embrace At Last; This Is Our Ending, This Is Our Past, 2007. Collection of the Modern Art Museum of Fort Worth. 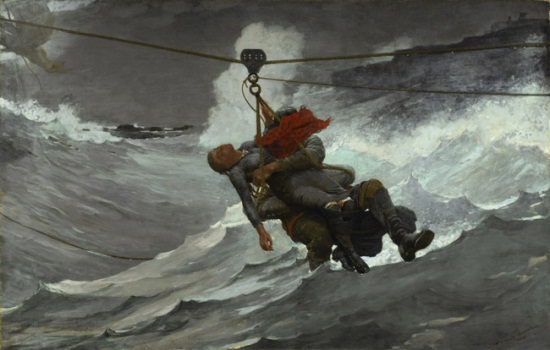 Winslow Homer, The Life Line, 1884. Collection of the Philadelphia Museum of Art. 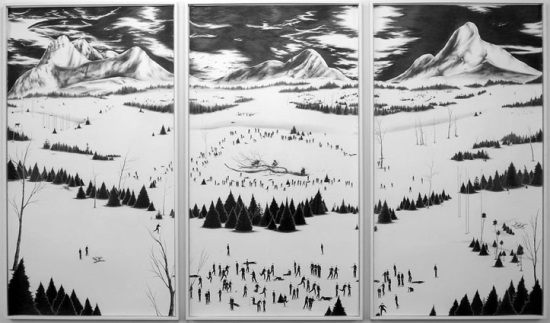 Robyn O’Neil, Everything that stands will be at odds with its neighbor, and everything that falls will perish without grace, 2003.